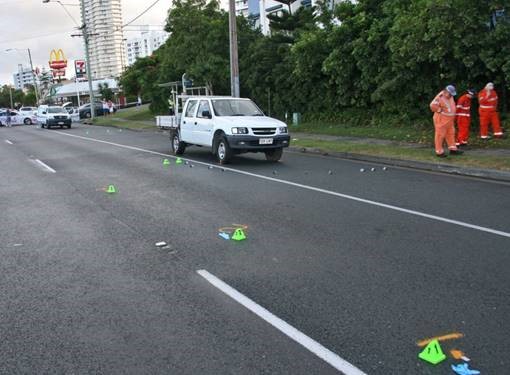 Family members have joined Queensland Police in making a fresh appeal for information relating to Omega Ruston’s 2009 murder on the Gold Coast Highway on January 26.

The 32-year-old Gold Coast man, a father-of-two and construction worker, was driving along the highway at Burleigh Heads at approximately 10.25pm on Australia Day (January 26 2009) when he was shot dead in a suspected road rage incident.

Omega had been travelling south in his white 2001 Holden Rodeo ute with two friends when he pulled over on the highway near the intersection with 5th Avenue following a traffic incident with a second vehicle.

Omega and one of his passengers exited the ute, as the second vehicle, a small maroon four-door sedan was seen stopping behind his vehicle before driving forward.

Two shots were fired from the rear passenger side window of the maroon sedan, with one shot fatally striking Omega in the abdomen.

New witnesses in New South Wales, Queensland and elsewhere have been identified or have come forward providing crucial evidence relating to Omega’s shooting death. Police will continue to canvas previously identified witnesses to provide much-needed closure to Omega’s family and bring those responsible to justice.

“Police believe the persons directly involved in the shooting death of Omega were linked to the Gold Coast and Sydney chapters of organised crime syndicates and outlaw motorcycle gangs,” Detective Ahearn said.

“Police believe that immediately after the shooting death, others with links to Gold Coast outlaw motorcycle gangs provided assistance to the persons of interest. These persons are being investigated as accessories after the fact to murder, which is also a life imprisonment offence in Queensland.

“We are aware relationships and loyalties in these gangs change, so we are encouraging those people with information to come forward now as this may be your last chance at redemption.

“This was a horrific crime, committed on a busy road with potentially many people nearby given the Australia Day public holiday so we are further encouraging anyone in the area at the time with even the seemingly smallest piece of information to contact us,” Detective Ahearn said.

If you have information for police, contact Policelink by using the suspicious activity form at www.police.qld.gov.au/reporting.

You can also anonymously report information to Crime Stoppers Queensland on 1800 333 000 or crimestoppersqld.com.au.

Bikelinc isn’t just for registering bikes – you can also register e-scooters. To register your e-scooter: ✅ Create or log...

Going for a bushwalk? Here are some tips before you go: ✅  Check the route and download a map if...