Do you have information about Glen Stewart? 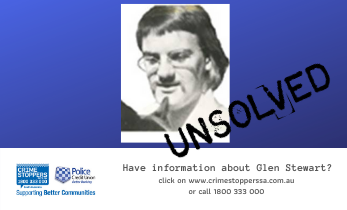 It is one of South Australia’s oldest mysteries, and today marks 43 years since the sudden and mysterious disappearance of Glen Andrew Keith (Hugh) Stewart.

On 18 February 1977 he attended a party at units at 358 Seaview Road, Henley Beach where he was reported to have drunk quite a lot of white wine.

Despite concerns by party-goers that he was too intoxicated to drive, he left alone at about 1am the following morning in a dark green 1965 Morris Mini Cooper “S” with a white top, SA registration 577-394.

Neither Mr Stewart or the vehicle were ever seen again.

It is unclear as to whether he had planned to make the 30-minute drive home, or headed elsewhere.

His room at 51 Devitt Street, Payneham was checked and an unopened pay packet was found on the dressing table.

Adding to his mysterious disappearance is that his beloved dog – his constant and inseparable companion – was left at home, adding to concerns for his safety.

He was a member of a religious movement known as Subud, but whether that played a role in his disappearance remains unclear.

Extensive enquiries have been conducted by police in all States, overseas and through Interpol. Those efforts have failed to reveal any clue as to what happened to Mr Stewart or his vehicle.

Police suspect he has been murdered.

Today marks the World Day of Social Justice – and it is staggering to consider that one in five workers...