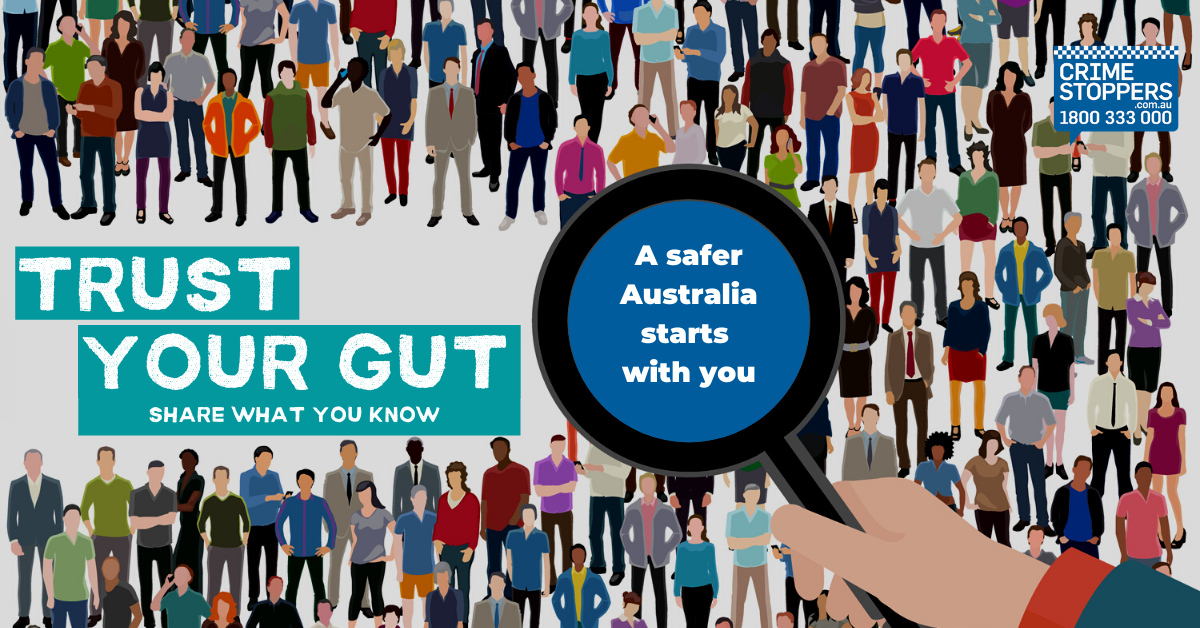 An independent national survey commissioned by Crime Stoppers Australia has revealed as many as 1 in 5 Australians choose to turn a blind eye to unsolved crime and suspicious activity rather than speaking out – with another 1 in 3 survey respondents preferring to share information with family or friends rather than authorities.

While over half of respondents said they were prepared to speak up, those who wouldn’t said they were held back because of personal concerns (79%) – primarily because they didn’t want to get involved or were concerned for their own safety and feared repercussions.

The results have concerned the nation’s preeminent information service, which is using National Crime Stoppers Day on Monday 18th May to urge all Australians to play a part in building a safer community by sharing with Crime Stoppers what they know, without having to say who they are.

Crime Stoppers Australia Chair, Diana Forrester said the research found a number of respondents second-guessed themselves before picking up the phone or going online to make contact, even though all types of crime information was welcomed.

“Of those people who said they weren’t prepared to speak up, we found 65% thought what they knew wasn’t worth sharing, 36% believed the crime information wasn’t serious enough to share, and 19% were held back because they didn’t know if something was actually illegal or not,” Ms Forrester said.

“These moments of self-doubt mean some people in the community are not sharing potentially critical information about an unsolved crime or suspicious activity with us. We want people to know that even the most insignificant piece of information might be all it takes for police to solve a crime, and we welcome information about every type of crime, no matter how big or small,” she said.

“It may be an overheard conversation, odd neighbourhood comings or goings, or something that just doesn’t feel right – and that’s the very time that people should listen to their instinct and share what they know with Crime Stoppers without having to worry about getting further involved or going to court.”

“That is why our theme for this year’s Crime Stoppers Day is “Trust Your Gut.”

When it comes to the types of crime currently of most concern in our neighbourhoods, the research found people are most worried about becoming a victim of theft or robbery (83%), while nearly half (43%) are also concerned about the impact of drugs in their local community. When asked about Australia’s biggest national crime threat, drugs emerged as the number one concern by almost half of the survey participants.

The landmark research, conducted by Colmar Brunton in February and March 2020, surveyed a statistically significant sample of Australians aged 13 years and older, which was then followed by a series of focus groups and in-depth interviews.

This is the first time Crime Stoppers Australia has specifically included people under 18 years of age (10% of participants) and persons from non-English speaking backgrounds (15%) in its market research activities, providing a more comprehensive understanding of Australians’ views on a range of crime issues.

“This is the most comprehensive research of its type we have ever undertaken and the results not only provide valuable insights into what motivates and prevents people from speaking up, but also assists to focus our efforts in the years ahead to make sure everyone can confidently share what they know with Crime Stoppers without fear of retribution,” Ms Forrester said.

“Even though most people are self-isolating at home right now, they can still keep an eye out for something that doesn’t sit right and speak up. We want to empower people by reminding them that Crime Stoppers is here for everyone and every crime, every piece of information can make a difference and a safer community can be achieved by people contacting us.”

Other survey insights include:

In Australia, someone contacts Crime Stoppers every two minutes to share information about an array of unsolved crimes and suspicious activity that is then passed to police and leads to an average of 100 apprehensions every week across the nation for a range of crimes.

Today is International Missing Children’s Day. In Australia, three in five missing persons reports relate to a child or young...

Throughout 2019 someone contacted Crime Stoppers every two minutes to share information about an array of unsolved crimes and suspicious...