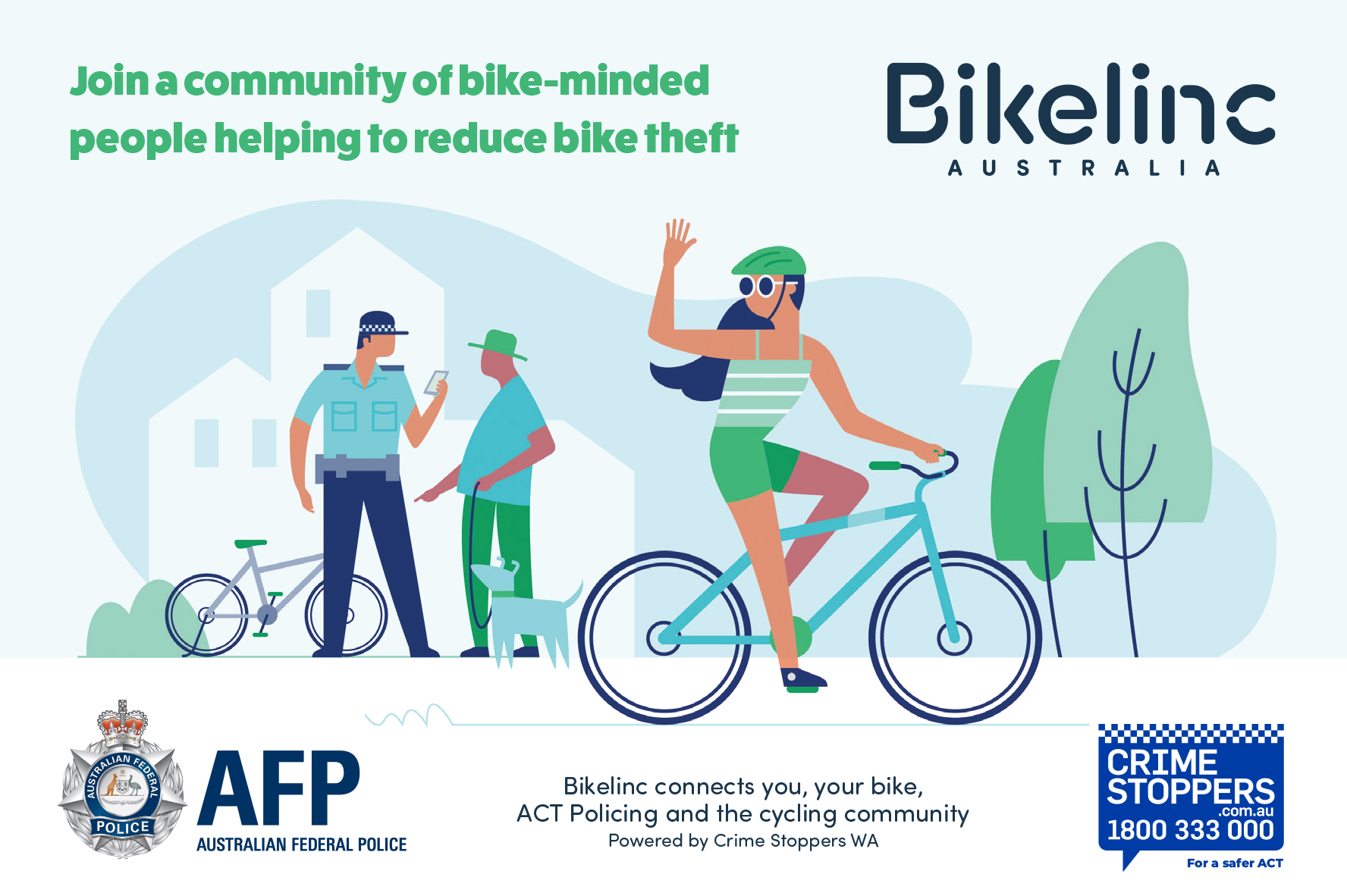 To help reduce bike theft in the ACT, Crime Stoppers has partnered with ACT Policing to launch Bikelinc – an online community tool that helps bike-minded people keep bikes with their rightful owners.

Bikelinc connects you, your bike, ACT Policing and the cycling community.  Bike owners and retailers create a free profile of their bike/s on Bikelinc using the bike’s serial number to link it to them as the rightful owner.

Police officers are very successful in recovering and retrieving bikes but have difficulty in returning them to their owners. This searchable tool, originally developed by Crime Stoppers WA and used with remarkable success there for almost a year, allows police to check Bikelinc in order to confirm the ownership of bikes that come into their possession.

Detective Inspector Mark Rowswell of ACT Policing said “We know in recent years more Canberrans have bought bikes which is great for our community but as a result bike theft has grown by more than 25% in the ACT since 2017. In 2019, 787 bikes were reported stolen.”

“Bikelinc will be a game changer for the reduction of bike theft in the ACT, allowing a community of bike-minded people and ACT Policing to make a significant difference in tackling this problem,” claims Diana Forrester, Chair of Crime Stoppers Australia and Crime Stoppers in the ACT.

“We were keen to introduce Bikelinc in the ACT, because it has been so successful in WA where 12,000 bike users have listed more than 15,000 bikes, with a total approximate value of $25million. More than 30 bikes, worth approximately $45,000, have already been reunited with their rightful owners and numerous police investigations have been assisted through Bikelinc. Bike theft enquiries often uncover other stolen goods, or drug raids on properties uncover stolen bikes.

“We have a large and enthusiastic biking community in Canberra, many with very sophisticated, expensive bikes which will be safer if they are registered with Bikelinc. It’s a proven Crime Stoppers’ platform so the ACT community can trust that their personal information will be kept safe and secure,” Ms Forrester said.

Bikelinc is for anyone who enjoys bike riding as a form of commuting, recreation or sport and doesn’t want bike thieves disrupting their cycling lifestyle. Bike retailers also have the ability to upload their high-end stock to Bikelinc and transfer a bike to its new owner’s profile upon purchase. For peace of mind, anyone thinking of buying a second-hand bike can also check Bikelinc to see that the bike isn’t listed as stolen.

“Just wanted to say well done on a website superbly executed. It’s flawless, and I’m a really-hard-to-please tech nerd. Well done all round. Just uploaded my bike, here’s hoping I never have to use this again! :-)” – John from Canberra